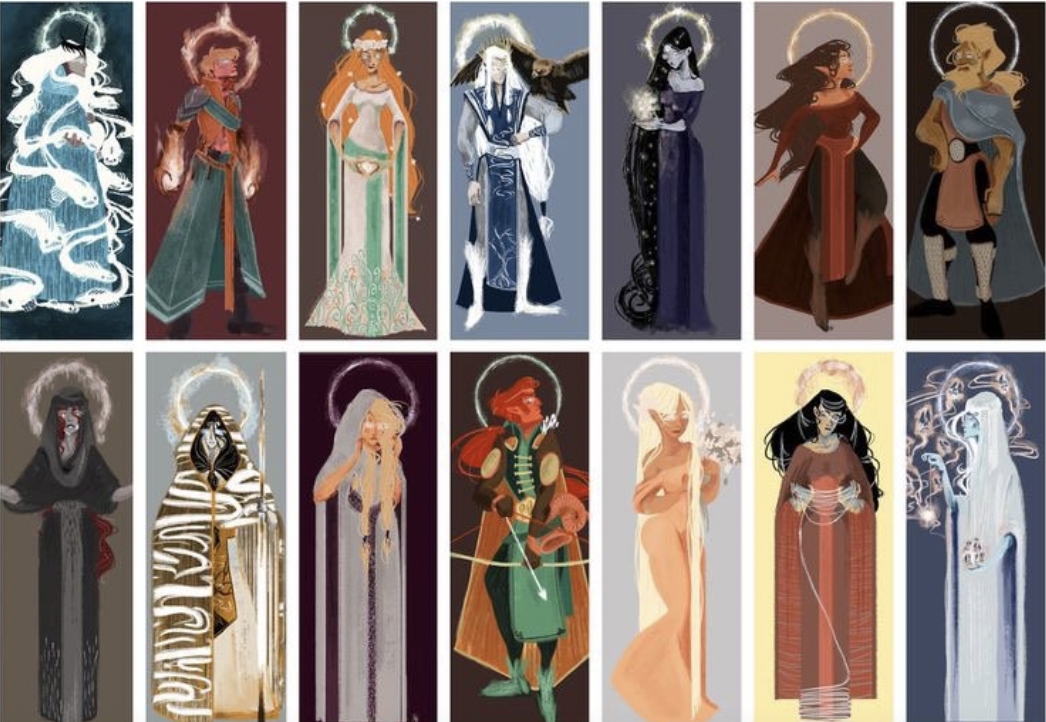 Characters frequently refer to the legendary lotr Valar in The Lord of the Rings. It is similar to an angel or a minor god who works in the background. From the beginning, they have been present and will remain so until the end.

Unlike The Valar Lord of the Rings, The Silmarillion gives them well-known placement.

Known collectively as the Valar, they are creations of Eru Iluvatar, the creator of the Earth and all the Worlds within.

Their creation was an act of thought by Eru (the divine spirit of Ea). Due to this, many treat Eru as their father, though not all Ainur is related. The Silmarillion names 15 Valar, whereas there are many Ainur. These are the ones who play a role in Middle-earth’s history.

Of the 15 original Valar, there were ,Ulmo, Aule,Manwe, Mandos, Lorien, Tulkas, Nessa,Orome, Varda, Vaire, Yavanna, Nienna, Este, Vana, and Melkor. It is said that Melkor became known as Morgoth, the First Enemy, and became the most powerful Vala.

Melkor, a character of treachery, split the Valar group into 14, reducing the ruling group from 15 to 14. 7 lords and 7 ladies are among these 14. However, two: Ulmo and Nienna, are not married, nor do they reside together.

Here are the 14 lotr Valar of Middle-Earth

The King of Arda and the Valar are also referred to as Manwe Sulimo. Wind and clouds are his domains. It is he who resides in Taniquetil, Arda’s highest peak. A palace in Ilmarin serves as his residence.

The two live together. He is not the most powerful of the Valar, despite being the leader. Arda became it’s head architect after he, Aule, and Ulmo took their positions.

Ulmo rules over the water. The friendliest of the Children of Iluvatar, he is close to Manwe. He never married, nor did he reside in the host of Valinor, like the other Valar.  However, he lives in Ekkaia which is under the sea.

In Arda, Aule worked on geology, minerals, and mountains, as well as the continents and mountains. In terms of tension against Melkor, Aule had the most.

Aule created the dwarfs. The Awakening of the Children was too long in coming, and he made his race instead. The Dwarves almost had to be sacrificed by Aule as a penance when Eru Iluvatar learned of this. He ultimately adopted them. Despite keeping the Dwarves asleep, Eru still wanted to awaken the Elves first.

The Huntsman, or Orome, was Vanna’s husband. In Cuivienen, when the Elves awoke, he was one of the first to discover them because of his constant travels.

The Eldar were named the Eldar after the Awakening of the Elves, and they accompanied him to Beleriand. During the war against Melkor, Orome also fought constantly.

The Halls of Mandos, where Mandos judges the slain, is where he derives his name. The knowledge he gained from Eru Iluvatar and Manwe’s guidance formed the basis of all his judgments. However grim Mandos may be, he is not malicious.

In addition, he has a wife, Vaire the Weaver. His elder brother is Lorien Valar. With each other, they are Masters of Spirits or Feature.

Irmo, also known as Lorien, was an ancient god who possessed the power of dreaming and visioning. After Miriel gave birth, he allowed her to rest in his gardens. Miriel chose not to return to Middle-earth after her death and was willing to go to the Halls of Mandos.

He also played a significant role in creating Day and Night. Since the two trees once united, Lorien and his wife Este argued that the Sun and Moon should not be placed in one place when the Valar placed the Sun and Moon in the sky. Instead of alternating together in the sky, they should rotate in Arda, giving it moments of rest. 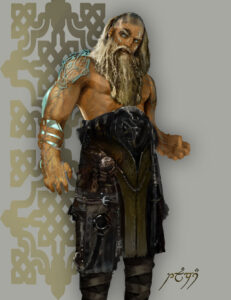 As the last Ainur to descend into Arda, Tulkas the Wrestler was the last to do so. Melkor’s invasion was prevented by his arrival.

He married Nessa after arriving. There is only one record in the history of the marriage of the Valar. As Melkor rested, he plotted for revenge.

Tulkas faced Melkor in direct combat after Orome confirmed the Children of Iluvatar had now risen. At the end of the world, if he is the Champion of the Valar, he will again fight Melkor. 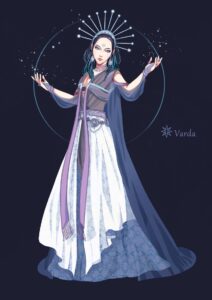 The Lady of Light, Varda is the Queen of the lotr Valar. In addition, she carries the light of Iluvatar, the Queen of the Stars. It is impossible to describe her radiance. Ilmare of the Maiar descends from Arda. She is the handmaiden of Varda. 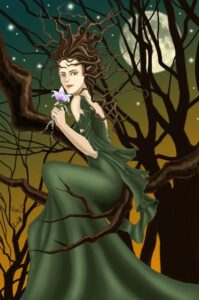 All that grows on Arda is ruled by Yavanna, the lady of the Earth. Trees and fruits grow under her care. The Sun and Moon were both created by her with Nienna.

The Dwarves of Aule threatened to cut down every tree on Arda, Yavanna once thought. Manwe and Iluvatar convinced Yavanna not to do it. The first Ents, a forest protector, were created as their solution.

As one of her Maiar, Melan began as Sauron. Aiwendil, also known as Radagast the Brown in Middle-Earth, was another Maiar of hers who later became an Istari. Nienna is the Valie of sorrow and grief, sister to Mandos and Lorien. But she is also the Ainur that governs both courage and pity. When people mourn, she listens and guides them.

Vaire is responsible for weaving the tale of Arda and has been called the weaver and the wife of Mandos. Upon Fine’s death, Miriel returned to life and served as the mother of Feanor.

Esta is The Vala of Rest and Queen of Healing, representing the Weeper. In addition to wearing a cloak of grey, she lives with her husband, Lorien.

As a result of their efforts, Varda had the Sun and Moon changed. Their gardens withered under constant light, and the stars were obscured. It was impossible to rest. Consequently, the Sun now alternates its location in the sky with the Moon. Both were in Ekkaia, while one would go out.

Vana is the Ever-young and the Queen of Flowers, the wife of the Prince of Courage, Orome. All the plants and animals of Arda are under her rule. A flower-embroidered robe was given to Nessa by Vanna when she married Tulkas. Known as a swift hunter and dancer, Nessa represents the dancer. During the first battle against Melkor, Nessa is of particular significance. Tulkas ascended into Arda during this conflict. They are the only Valar couple to have married. Known as the most powerful of the Vala, Melkor is the brother of Manwe. Since Melkor rebelled against Eru and married Arda, he was no longer considered a Valar and fled to Middle Earth. Melkor destroyed the two lamps and two trees of Valinor during the age of the trees and the first age.

A dark Lord whom Sauron served, Melkor, later became known as Morgoth (Sindarin for “Black Foe of the World”). Melkor’s power comes from having the vision of Eru. The First Enemy, Morgoth, was his name after he married Arda.

The War of Wrath ultimately ended the first age by destroying Melkor and the Host of Valinor. To punish him, he was exiled from Arda and imprisoned in the Void.

What Was The Purpose of the lotr Valar?

Children of Iluvatar followed the eru lotr into Arda as guides. These beings did not visit people (men and elves) as lotr gods but as advisors and assassins.

Vala is imprinted with the thoughts and visions of Eru. Several portions of the history of the world are shown to the Children of Iluvatar, including the calamities that await them. In reality, they cannot comprehend what will happen to the children or when and how the world will end. Melkor, however, is the only one who possesses all of Eru’s insight.

Ainur, also known as the Music of Iluvatar, was attended by the Valar. Vala, one of the great deities who shaped the known universe, embodied Iluvatar in different ways.

The marriage of Arda was the result of a rebellion by Melkor, one of the Vala, who added his tune to the Music of the Ainur. This betrayal led to Melkor’s banishment from the Valar, which sparked a long conflict between the Valar and Maiar.

The Children of Iluvatar decided to prepare Arda for Ea and Arda after a few Ainur left. As guardians, they offered guidance and support. They never considered themselves gods, even though some of the Valar were worshiped as gods.

The True Names and Power of Valar Are Unknown

We do not know the actual names of the Valar. Only their titles are listed in the history of Arda. In the reign of Manwe, for example, he controlled the wind and the Valar.

There are eight Valar who are regarded as the most powerful among those that moved to Arda. They are known as the Avatar to distinguish them from the other Valar.

5 Most Powerful Dwarves in the Lord of the Rings (Ranked)